We have just completed a brief six-week lecture series, The Decline and Fall of the Roman Empire. It seemed natural that in the last lectures the focus slowly shifted from strictly Roman history to an atmosphere in which parallels were drawn between the Roman past and our present. As stressed in the lectures, even the Romans, during the very days of their decline and fall, were drawing such historical parallels between their present catastrophic situation and their distant past. Drawing such parallels seems to be an almost instinctive and unavoidable habit when studying history.

Some comparisons were easy to draw and the lessons easy to learn. Imperial Rome, for example, had a fundamental instability embedded within the very framework of her Empire: she had no established rules for succession or provisions that allowed her to peacefully remove miscreant emperors. The USA, however, has had a stable framework from the beginning (the

Constitution), which provides for an orderly transfer of power (elections) and the removal of corrupt politicians (impeachment). Both Rome and America have attempted to deal with their large urban dependency classes by doling out unrequited benefits; in both cases that approach exacerbated the problem, by making the dole a way of life instead of a temporary station on the road to recovery. Other common problems were highlighted in the lectures: the devaluation of citizenship, the failure to assimilate new arrivals, politicians’ tendency to opt for an expedient, short-term “solution” rather than investigate the long-term ramifications of their actions, and a host of other maladies. But certain situations, faced by ancient Romans and modern Americans, struck home particularly hard. 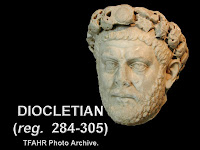 What happens when a government takes control of an economy? Not necessarily disaster, as many libertarians believe. There are instances when a government has seized control of a state’s entire economic apparatus and lifted the state from depression to expansion; Nazi Germany comes to mind. More often than not, however, when government assumes command over the economy, catastrophe ensues. Such was the result when Diocletian (reg. 284-305) took control of the Roman economy by regulating prices and wages, turning some industries into imperial corporations, and making certain occupations hereditary. Modern historians refer to Diocletian’s transformation of the Roman economy as the “militarization” of the economy.

The US economy has been “militarized” at certain times (during WWI and WWII), although we prefer to use the phrase “put on a wartime footing.” What Diocletian, Woodrow Wilson and FDR did was essentially the same. So, why did Diocletian fail and our presidents succeed? It was a matter of wartime versus peacetime.

Most major powers (like Imperial Rome and the USA) exist in a state of perpetual low-grade war, meaning military conflicts of one caliber or another are perpetually afoot in the background. The lulls in the din of background warfare we call peace. Diocletian attempted his seizure of the Roman economy after he had, for all practical purposes, secured the borders, quelled internal rebellion, and achieved a reasonable state of peace. Wilson militarized the US economy in wartime. FDR attempted the same in peacetime and failed miserably to lift the USA out of the Great Depression until the onset of WWII. Therein we find the difference between failure and success.

A competent government is generally able to assess what it needs in wartime; it knows how to provision its soldiers. Provisioning its armed forces in war is one of the truly legitimate affairs of a government; it should know what its soldiers need. But no government has ever proved able to assess what its citizens need or want in peacetime. No financial wizard, no computer model has been found that is able to calculate the present and future needs and desires of an entire nation. The most any government can do is to dictate what it is willing to offer its people out of the public purse. 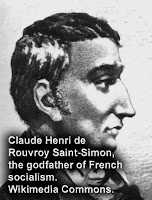 Diocletian’s militarization of the Roman economy was an early example of a state-controlled economy. Another was European mercantilism, the alliance between government and business that dictated what goods could be sold from where and by whom. Another form of a state-controlled economy is socialism. But by whatever name it operates under, a state-controlled economy can do no other than dictate what will be provided for its citizens. And the fathers of European socialism realized this. Claude Henri de Rouvroy Saint-Simon (1760-1825), the godfather of French socialism, decreed that if the people do not obey the decisions of the economic planning boards, “they will be treated like cattle.” Considering what we do to cattle, most people would opt out. Of course it is never publicly phrased as such. Rather, the government benevolently assures us that it can provide for our security against the vagaries, cruelties, and misfortunes of life if only we bestow upon them the power to decide for us: our liberty in exchange for security.

Consider next what might have been our present situation had we left the prediction of our needs and desires to state planners. What government was it that invented the automobile? Which administration made available the personal computer? What politician discovered the means of electrifying our homes? Whence radio and television? The point is that most of recent innovation did not flow from government but from the ingenuity of the private sector. Governments’ task should be to support and encourage that ingenuity, not to try to usurp it.

To consign to government the satisfaction of our needs and desires (in a state-controlled economy) is the Raw Deal. The state first proclaims its superiority over us; it claims to know better than we do what we want and need. Then it drains away our freedom. It is not, however, some sort of apocalyptic seizure of power with drum rolls and trombones. It is more like the manner in which a yak is bled to death.

To watch a yak die is a numbing and frightening experience. Given the scarcity of nutritional resources in the Himalayas, little is wasted of the animal. Once tied down, the yak is calmed, and slowly a bamboo tube is inserted into a major vessel to drain the blood into a container. The poor yak now is too feeble to know what is happening to it; and too weak to move, it is finally dispatched and slaughtered – still with no waste of a drop of blood or a gram of flesh, nor viscera, horns or hooves. I propose the yak as the mascot of the populace that trades its liberty for security. 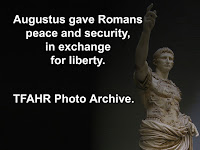 Having made the trade of freedom for security, slowly one responsibility after the next is drained away: educating our children, preparing for our future, saving for a rainy day, caring for our family, arranging for our own health care, training ourselves to confront future upheavals, comforting our elders, serving our community. The Siren call of the State is, of course, “The government can do it better!” And assuredly private charity withers and personal initiative dies. We begin our stroll down the road to serfdom (F. A. Hayek, The Road to Serfdom).

The Raw Deal of liberty for security is always sugar-coated. A honey-tongued demagogue will come not threatening and intimidating, but preaching in righteous tones of charity, helping the most vulnerable amongst us, lifting the down-trodden, and creating the perfect society. How often throughout history have tyrants sweet-talked their way into power!

NOTE: The Decline & Fall of the Roman Empire 6-lecture series is now available on DVD and CD at http://www.stylusproductions.com/DFRome.html. Individual lectures entitled "Why Did Rome Fall?" and "Historical Comparisons" are also available on DVD at the same site.
Posted by William Neidinger at 1:30 PM