WHEN A DEMOCRACY DIES: WHAT THE UNITED STATES OF AMERICA CAN LEARN FROM ANCIENT ATHENS

On January 25, 2010 we shall begin a ten-week examination of the history of ancient Greek civilization. Of particular interest and special emphasis will be the rise and fall of the first democratic government in the West – ancient Athens. The importance of understanding the fate of ancient Athens is that the first democracy’s trials and tribulations were remarkably like our own, and, in fact, remarkably like those of other democracies that have come and gone from the stage of history. Perhaps there are inherent in this most peculiar form of government certain flaws that tend to wreak havoc with the system itself. And if such flaws are systemic, then certainly by now those living in democracies would be on guard against them. But, then again, perhaps the most difficult lesson to learn from history is how difficult it is to learn from history. 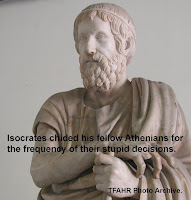 There are some stark differences between the democracy of ancient Athens and our own. The most obvious is that theirs was a “direct democracy,” ours a “representative democracy.” Each has its drawbacks. Hasty and ill-informed decisions were the hallmark of ancient Athens, where bills were debated and voted upon within one day, and trials were litigated and verdicts rendered before sunset. Utterly unresponsive and unrepresentative representatives are, at times, a plague of our own. The ancient rhetor Isocrates once remarked that the Athenian Assembly made so many stupid decisions so often that it should be paid to meet even more often by Athens’ enemies. One wonders, might not the same be said of our esteemed legislative bodies? Despite the various differences between the two democracies, some eerie and disquieting similarities are hard to ignore. The similarities are so disconcerting precisely because we know that they were, in Athens’ case, the cause of her demise. In The History of Ancient Greek Civilization we shall concentrate on four of them; let’s preview them here. 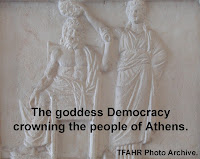 Athens like the USA had its own “greatest generation.” And the political, military, and economic catastrophes suffered by the Athenian G² were far greater than anything suffered by any generation in American history. But they managed to bring themselves back from the abyss, rebuild their city, restore their democracy, and then lay the foundation and set the precedents for its final failure.

The first unsettling similarity shared by the two democracies is the cult of the political personality. Perhaps it is an ingrained feature of democracy that factions once formed follow famous personalities. But as time goes on, the cult figures followed are followed less for their ability to lead and more for their ability to dazzle the electorate. The USA probably could not have held together without the majestic presence of General and President George Washington. But he voluntarily stepped down after two terms, making him, if we might borrow a description of him from his former enemy, King George III, “the greatest man on earth.” The Athenian democracy probably owed its life to the lawgiver Solon, but having done his job, he went into voluntary exile for a decade. Both men realized that they were not as important as the political 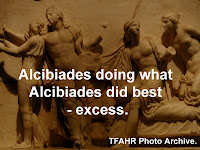 creations they helped bring to birth and that their continued presence on the stage might, far from nurturing, cause their cherished institutions to suffocate. In ancient Athens, the democratic politicians who followed Solon tended to think more highly of themselves than of the democracy entrusted to them. Pericles, although a sincere democrat, overstayed his welcome on the political stage to the point where the Athenians finally dragged him into court, albeit on trumped-up charges. He was succeeded by Kleon, who had none of the abilities of Solon or Pericles, but was a ferocious rabble-rouser. And finally, at the end of the fifth century BC, the Athenians succumbed to the charms of Alcibiades, a man of dubious loyalties with absolutely no dedication to Athens, and given over to personal and political excesses.

In the early days of Athenian and American democracies short-term occupancy of political office was the rule rather than the exception. In both instances, however, there eventually emerged professional political classes, men for whom political office was not just an occasional responsibility but a way of life. One Athenian general was elected to the same office 45 times (elections in Athens were annual). Some American politicians have warmed the same seats for three or four decades. And then political dynasties emerged, families whose scions were destined for the political life, men (and women) who knew no other life than politics, who had no other skills than political, and who never held a job other than that of politician. 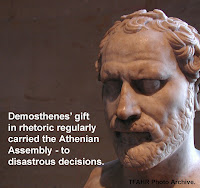 Another unsavory feature of the cult of personality was the role oratory came to play. Many of the best Athenian and American statesmen were not good speakers. More than a few Athenians were too intimidated to speechify. In the Assembly one was allowed to call a speaker a liar and, in fact, citizens were hectored off the podium when the people thought them overtly mendacious, covertly treasonous, or utterly mediocre. Abraham Lincoln cut a poor oratorical figure and that which we now consider to be his most memorable speech, the Gettysburg Address, was panned by the press at the time. But in the later days of Athenian democracy a well-crafted and beautifully delivered speech came to be highly prized in the political arena and the law court. Men marveled over the beautiful cadences and poetical prose of a Demosthenes. And one wonders if the speech itself 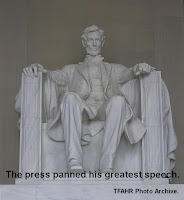 was applauded more than the motion it was meant to carry. Nowadays, after a presidential speech or debate it seems as if the major concern of our news readers is the delivery. His or her “best performance to date” overloads the commentary rather than an analysis of what was said or not said. Is such a development the result of the theatrical nature of democratic politics or of the dumbing down of electorates, unable to follow a detailed argument but appreciating well the artistry of entertainment, plays (then) movies (now)?

Litigiousness is the second common characteristic of the ancient and modern democracies. Athenians like Americans gravitated towards the law court as the court of first resort. But it was actually another flaw of the system that helped do in Athens, the tendency of the courts to usurp the functions of the legislature; in the USA we now refer to this as legislating from the bench. This tendency had a corrosive effect on how laws came to be promulgated and enforced in ancient Athens (more on that in the class).

The third of the themes common to Athens and America is the public’s attitude towards money. What the citizens of both states failed to understand is that a government has no money of its own; it must get it from somewhere or someone. Athens was hobbled by the fact that it dealt in cold hard metal; it couldn’t print money or get the Chinese to buy its junk bonds. Both governments did have physical assets; Athens its slave-worked silver mines, America its airwaves, federal lands, drilling rights, etc. In both cases, however, the assets did not cover the costs, largely because the public came to expect the government to assume the costs of what previous generations had considered to be “personal responsibility.” Athenians never, even in their decline and fall, expected the government to educate their children, care for the poor, provide health care, or tend their elderly; that was the job of the family. But they did establish the Theoric Fund to finance their days of leisure: at the theater, in the festivals, sitting on a jury, attending the Assembly. Americans now apparently want the government to coddle them cradle to grave but not necessarily to entertain them – except when the government funded the digital conversion boxes so that “the most vulnerable among us” would not be without the lifeline of television.

To make up shortages of ready cash both states hit upon the same solution: tax the rich. And the results were identical, predictable, and enervating. Increasingly vehement class warfare was the immediate result. Politicians intentionally exacerbated class differences to secure their own political positions. In modern like ancient times, the demagogues rallying the poor were rarely poor themselves and lived lives wildly different from the downtrodden they claimed to champion. As the rhetoric of class warfare heated up, the next two steps down the path of perdition were inevitable: tax evasion, then the flight of wealth. When wealth is not protected but subject to increased and oftentimes random appropriation through new and inventive taxes, wealth goes to where it is safe and can create more wealth. The final step: the definition of “wealthy” changes. He who yesterday considered himself “middle class” now finds that when the wealthy have departed it is he who fills their shoes. The Alternative Minimum Tax was a dandy tax when it hit the undeserving rich, but now that it is hitting the deserving middle class of this country, the exact same tax has become a moral outrage. Athens’ middle class faced an identical dilemma. Hopefully we will not follow the Athenian penchant for overtaxation that eventually saw and occasioned the collapse or flight of the very industries that once made her prosperous.

And finally there is the matter of immigration. Athens at one time welcomed and even encouraged immigration. As did the USA. Athens eventually all but ended giving citizenship to outsiders (those not born of two Athenian parents); we are not there yet. Why did Athens’ immigration policy change? It changed for reasons that Americans should take to heart. Foremost, the Athenians did not want tax monies spent on more and more people; only citizens received stipends from the Theoric Fund. Though resident aliens were always themselves and their labor taxed, the Athenians eventually closed the door on their path to citizenship. Their precious Theoric Fund morphed into a funding agency for Athenians and only Athenian-born Athenians. In a queer way this highlighted a definite devaluation in the concept of citizenship – that the defining characteristic of Athenianism had become “getting money from the Athenian government.” The Athenians in a very real sense lost a sense of the grandeur of their city, its history, its mission, and their special form of government. They ceased to believe in Athens, other than in Athens being a funding mechanism to make life easier. They no longer wanted to convert others to their way of life, for they themselves had ceased to believe in it.

That led to the final failure with regards to immigration, the failure to assimilate. Both Athens and America had and have the ability to absorb (that is, to take in) many more people; for us, if for nothing other than to fund our governmental Ponzi schemes (Social Security, Medicare, Medicaid, et al.). But Athens lost and America is about to lose its ability to assimilate, that is, to welcome immigrants and convert them to a new way of life. For if a nation no longer believes in the special qualities of its way of life, the immigrant, though unwelcomed, will still come and stay - but unassimilated - to do precisely what citizens are doing: trying to get as much as possible out of his stay here. Have we, like the ancient Athenians, come to believe that the most important feature of our way of life is that our physical needs are taken care of by the government?

Athens’ experiment in democratic governance was the first, inspiringly noble and ultimately tragic. Unfortunately, the lessons of how the Athenians strangled their own offspring seem to have been lost on us. But our politicos do deliver great sound bytes. See you in class.

The History of Ancient Greek Civilization, a 10-lecture adult education series, begins January 25, 2010 in Houston. For information and a registration form, visit http://www.tfahr.org/greece.html .
Posted by William Neidinger at 7:43 PM