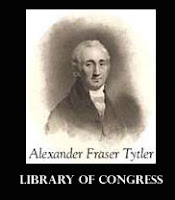 While the United States of America was in the process of being born, Professor Tyler is said to have penned the oft-quoted dictum (here loosely paraphrased and heavily edited) about democracies failing due to loose fiscal policy and it members devolving from courageous rebels who fought to be free, to apathetic citizens concerned chiefly with the satisfaction of their material wants, to dependent wards of the state kept subdued by subsidized bread and circuses and cheap benefits. Ultimately, Tyler maintained, such wards of the state, unable to fend for themselves, slide back into a condition of enslavement. (See the ending of the previous posting for the exact quotation.)

So, who was this prescient Professor Tyler and whence his observation? If the truth be told, precious little is known about the man. Most curious is that his surname was probably Tytler and not Tyler, although he is more often referred to by the latter. Alexander James Tytler / Tyler, by general consensus, was a Scottish lawyer and who graced our planet from 1747 until 1813. His one known publication is Essay on the Principles of Translation (1790). Alas, the quotation about democracy can nowhere be found in Essay. Some claim it came from another of his works on the history of the democracy of ancient Athens. And certainly the bit about the people voting for the candidate who promises them the most from the public treasury describes the situation in the last days of the Athenian experiment. But if our esteemed professor ever authored such a book, no one has yet discovered it. Nonetheless, since World War II English-speaking politicians and pundits have been enthusiastically quoting the man. 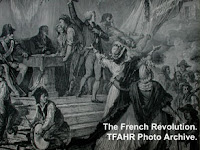 Let’s not quibble over the authorship of the quotation. Whether it was Professor Tyler or Tytler or Dr. Oudeis is beside the point; many believe that what he said rings true. And it well appears to be the observation of a man who had studied both ancient Athens and Rome and was probably following the unfolding events of the French Revolution. He might also have been casting an eye across the Atlantic at the infant USA.

We can justifiably object to Tyler’s allotted time span for a democracy (disputable, at least), and we can argue the course of his democratic devolution (convoluted, at best), but the fact remains: Tyler’s quotation has received the benefit of being a piece of inherited wisdom simply because it has been quoted so often. That, in itself, relieves us of the task of actually having to think about it. But let’s argue the pros and cons of Tyler’s ideas just for forensic purposes.

Tyler gave democracies 200 years; we’re pushing 225 here in America. Have we beaten the odds? “Yes!” we joyously congratulate ourselves, “we have not only survived, but far from apathetic and dependent, we’re on the cusp of creating a perfect society and saving the planet to boot!” “ ‘Apathetic’ and ‘dependent’ are hardly adjectives that can be applied to the American public,” our devilish Objectionist continues, “after all, we are the workaholic, cowboy capitalists that so much of the world despises.”

Let’s circle the wagons and exclude our foreign friends from this conversation, and be bluntly honest amongst ourselves. The time is ripe for the most despised of intellectual activities – introspection.

Have Americans grown politically apathetic? Only one piece of evidence needs be introduced to sustain the accusation: voting turnout. From the mid-nineteenth century on, the turnout for presidential elections routinely ran in the 60%-80% range; admirable, given the exigencies of transportation and communication. Not so in the twentieth century. We bottomed out in the 1996 Clinton-Dole-Perot contest when only 49% of those of voting age bothered with the process. Things have improved slightly since then. But the much ballyhooed avalanche of a turnout for 2008 proved to be only slightly more than 2004. Compared to the 70% plus rate in Iraq (under fire and threat in time of war), that’s embarrassing. Our local paper here (San Antonio) reported that in off-year elections, sometimes less than 5% of the electorate turns out, even when important budgetary matters are at stake. We are only talking about a commitment of less than a few hours a year, and our transportation and communication problems are hardly as grim as those of eras past. We do fare rather better, however, than the Romans of the last days of the Republic, who blatantly sold themselves and their votes to their patrons. We must, of course, gloss over the days of Tammany Hall and the like.

Have Americans grown dependent? Although we cannot be accused of somnambulating through life in a cradle-to-grave welfare state, it is undeniable that the state now takes care of increasingly more of our private concerns and personal needs. A quick amble through the pages of American history brings this trend to the surface.

When Congress, in 1794, voted $15,000 for refugee relief, James Madison objected, “I cannot undertake to lay my finger on that article of the Constitution which granted a right to Congress of expending, on objects of benevolence, the money of their constituents.” In 1854 President Pierce vetoed a bill providing funds for the mentally ill, claiming that the Constitution does not authorize public charity. And when President Cleveland vetoed an 1887 Congressional appropriation for aid to distressed farmers, he justified his veto by citing the fact that the Constitution does not warrant relief for individual suffering and that it is not the task of the government to support the people. Such presidential thwarts of Congressional attempts at charity were common until FDR. Then, in one fell swoop, the president took the lead in proposals to alleviate the plight of the citizens. Now it’s a neck-to-neck race between our presidents and our congressmen.

We currently have so many government programs alleviating so many plights in so many ways of so many constituents that the programs, like Satan, are legion. As late as 1960 JFK could still admonish us not to ask what our country could do for us but we could do for our country. Even in the 2008 election JFK’s admonition surfaced with great regularity. What was amazing was that as our politicians intoned said admonition, everyone kept a straight face, as we were promised more federal aid and guaranteed more “rights.”

“But we are now,” our Devil’s Advocate might point out, “a more charitable nation!” And on the surface, we certainly appear so. But a closer self-examination gives lie to the self-congratulations. First, we are, after all, awarding ourselves this largesse from the public treasury. It is not as if we were giving it to some disinterested third party. Second, we are not paying for it. Our massive debt is being floated down to later generations who will pay it. We have printed money, placed IOUs in various funds, asked foreigners to finance our debt, and run deficits blithely believing that someday someone will pay our tab. 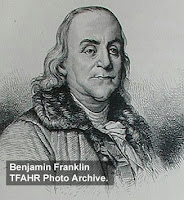 Might we, after all, be sliding from apathy into dependence? Have we already made that trade against which Benjamin Franklin warned us: freedom for security? Have we, like the bread and circus crowd of old, sold our most basic freedom, personal responsibility, to the politicians who promise us freedom from insecurity? Yea or nay, but the question remains, if the state is not to care for the least fortunate amongst us, then who shall? Next time, “Charity, Jobs Creation, and Stimulus Packages, Roman Style.”

Posted by William Neidinger at 7:09 PM