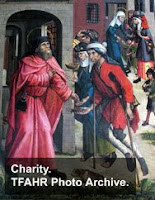 The phrase “Christian charity” rolls off a westerner’s tongue with such facility that the two words are pronounced as if they were one, and the two concepts treated as if they were synonymous. We are apt to forget that charity has been a fairly universal religious and secular dictum, even amongst the ancient pagans. The Latin caritas (from which our charity derives) implied for the ancient Romans an esteem, care, regard, or empathetic feeling towards another that was quite distinct from that emotion loosely defined as love (amor). The caritas one felt towards one’s family obviously manifested itself differently from the caritas one felt towards one’s neighbors and strangers. It is the latter that here concerns us.

The Roman patron-client relationship we discussed in an earlier posting was not, of course, entirely a charitable affair. A definite quid pro quo was involved; the client, indebted to his patron for the patron’s largesse, was expected to advance the patron’s agenda in the social and political arenas. The Romans also practiced a “disinterested charity,” benevolence bestowed without the expectation of recompense: giving to beggars, for example. But they also practiced something between the two, what we might call “symbiotic charity.” The guilds and associations (collegia) into which the Romans grouped themselves along occupational, religious, ethnic, educational, or neighborhood lines generally maintained funds into which members of the association paid. Members could tap into the fund in hard times: sudden unemployment, injury, eviction, to bury the dead. How well this system worked, we don’t know; our ancient sources provide us no information.

We do, however, have a clearer idea of what transpired when the Roman government got into the charity business. Rome had both urban and rural charity programs for her poor. Had the programs simply failed and been abandoned, that would have been one thing. But even unsuccessful government programs rarely are jettisoned. The urban and rural dole programs did not alleviate poverty; they perpetuated and exacerbated it. Living off the dole became a way of life for generations. The urban dole also created a monstrous urban dependency class (the mob) that helped suck the life out of the Roman economy. An objection might be raised, “only the heard-hearted speak of economics, when the good-hearted speak of charity.” But decisions to allocate charity do have economic consequences.

An economic decision is fundamentally how one allocates limited resources that can have other uses (the definition is derived from Thomas Sowell, Basic Economics). Those resources can be money, time, energy, people, clean water, food, lumber, anything. The basic ideas are simple. First, we do not have infinite supplies of anything. Second, we must decide how to use these human, animal, mineral, and financial limited resources. Third, when we allocate these limited resources to one thing, generally speaking they cannot be used for another. Fourth, the more abundant a limited resource, the more carelessly we tend to treat it. 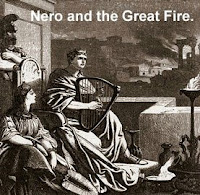 Disinterested, unrecompensed charity certainly has an important place: in natural disasters, to the terminally ill, to the permanently and totally disabled, during social catastrophes. All societies have had their asylums, lazzaretti, and emergency relief funds. Even the deranged Nero proved human enough during the Great Fire of 64 AD to break open the coffers of Rome to house and feed the victims of the fire. But when exceptional charity becomes routine maintenance, that society has taken the first step on the proverbial slippery slope. Let’s see what happened to Rome when she institutionalized charity.

The dole started as an attempt to subsidize the price of grain for the poor of Rome in the second century BC. By the first century BC free bread was being distributed to over 300,000 people in the city. By the second century AD emperors were routinely distributing gifts of meat, olive oil, and sometimes cash to the citizens. Additionally, there were, of course, the free games. Hence, our bread and circuses. The effect of having created such a massive urban dependency class was twofold.

The most devastating effect was on the dole recipients themselves. Certainly not all 300,000 were end-of-the-line, terminal charity cases. Most were probably victims of moral hazard, to borrow a sixteenth-century phrase from the insurance industry. The idea behind the concept of moral hazard is that when there is insurance, people tend towards riskier behavior. The insurance here is the dole; the risky behavior, idleness. The dole recipients became permanent wards of the state, unable to fend for themselves. 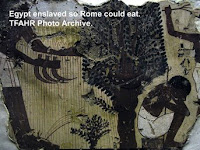 As debilitating as the dole was on its recipients, the creation of the dole had a rippling effect far beyond the urban dependency class. The grain that came to Rome (and other large cities) was a limited resource. But the actual grain itself was only one resource that had to be allocated to the mob; many other limited resources were diverted to this venture in state charity. Entire provinces were given over to raising grain for the dependency class of the city of Rome. The annual harvest of Egypt could supply the imperial city for less than half a year. That meant that the farmers in Egypt on the imperial estates were kept in conditions little better than slavery, just so Rome could be fed. This required hordes of estate managers to keep the farmers in line. The Egypt-to-Rome shipping lanes had to be secured and protected. Two full Roman army legions were permanently stationed in Egypt and northern Africa just to assure the continuity of the grain supply to Rome. That meant that they couldn’t be deployed to defend the frontiers. Farming in Italy was crippled by the artificial prices the state paid for its grain. To maintain the farmers, shippers, and soldiers, and to subsidize the grain, money was necessary. The citizens throughout the Empire were taxed for the mob’s sustenance. 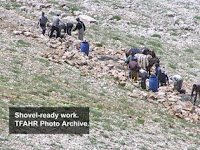 The emperors were fully aware of the staggering human and financial resources being drained away in this endeavor. And they realized full well that many on the dole were perfectly capable of some rudimentary employment to earn their keep. So they tried their hand at stimulating the Roman economy by creating jobs for these people, “shovel-ready jobs,” in fact. That was their mistake. A government does little when the government itself provides the actual job; its does much more when it enables its citizens to create the jobs. But that is a concept that politicians have had a hard time getting their arms around, then and now. Stay tuned for the next posting.
Posted by William Neidinger at 7:39 PM