HURRICANE KATRINA, PROFESSOR TYLER, AND BREAD AND CIRCUSES: PART I

In the immediate aftermath of Hurricane Katrina, I had tuned into a panel discussion by a bevy of pundits seeking to explain the reason for the “debacle.” Most were mouthing the utterly predictable, accusing various branches of government of gross ineptitude, insensitivity, incompetence, et al. Their comments were neither memorable nor informative. I was about to switch channels, when one of them dropped a zinger. She wondered why anyone should be the least bit astounded by the fiasco; after all, she argued, we all had worked so hard to create precisely this, citizens who were incapable of taking care of themselves. That was the last of the interview I heard; the ensuing cacophony drowned out everything else and I tuned out – stunned. 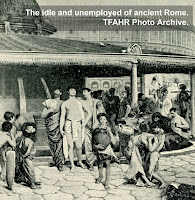 Her comment was strangely reminiscent of something a professor of mine said more than thirty years previous. When discussing the Roman mob (the bread-and-circuses crowd), he accused the Roman government of having created a citizenry that was incapable of taking care of itself. “A path,” he proclaimed, “we ourselves are now strolling down.” That was spring 1970. Being a wise twenty-something, I pronounced the man a fool.

Leaving the panel and my venerable professor aside, we might ask ourselves a very fundamental question. And that question is not, “Are we strolling down this very same path?” But, more basically, “How does something like this happen?” Do we (our governments) deliberately create dependency classes? The operative word is “deliberately.” The more cynical amongst us might say, “Yes, it is how politicians create a power base.” The more charitable amongst us might say, “Nay, it is only a result of good intentions gone bad.” In fact, both responses are correct. A quick look at the evolution of the ancient Roman urban dependency class might shed some light upon the inquiry.

The phrase “bread and circuses” comes from the ancient Roman satirist Juvenal, who wrote, “… now the people have but two passions, bread and circus games …” He was referring the massive ancient Roman urban dependency class (aka, the mob) that produced nothing but demanded from the imperial government safety, food, and entertainment. But surely the creation of an unruly, parasitic mob was not a deliberate policy of the Roman government! Indeed, it was not. It was the result of two forces in ancient Roman society: one, a well-intended government policy of charity towards the down-trodden; and two, the tendency of the less fortunate of society to place themselves in a position of dependence on the well-to-do. These two currents flowed together in the first century BC and metastasized into an urban phenomenon that would come to drain the Empire of untold wealth and an inordinate amount of time and talent.

Charity, in early Roman history, was not an institutionalized function of the state. Wealthier families became patrons of the poor, who, in recompense, became clients beholden to the patrons. In exchange for sustenance, the clients were expected to support the political agenda of the patrons. At first, this entailed no more than voting the patron’s agenda in the assembly. Later, it involved arming oneself and furthering the patron’s agenda in the streets. The rent-a-mob became a formidable tool in the Roman political arsenal.

Likewise, the addiction to “bread and circuses” had an innocuous beginning. During a second century BC grain shortage, the poor of the city of Rome clamored for the government to do something (always a bad idea) to make grain more affordable. So, to stabilize the soaring price of grain in the city, the state subsidized the price of grain, ensuring every Roman citizen the right to buy grain at an artificially low price below true market value. It also demanded that grain growers who sold grain to the government do so at a fraction of the real market price. The results were predictable. Farmers, seeing no profit in such an endeavor, either sold their grain elsewhere, stopped farming, or switched to more lucrative crops. The state had to look further afield (to northern Africa) to find cheaper grain. And as they did so, the crowd’s demands increased. 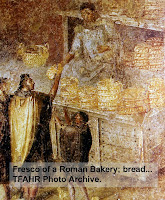 When precisely grain was first distributed free to the urban proletariat is unknown. But by the time of Julius Caesar (died 44 BC) the dole roll in the city of Rome peaked at about 300,000 persons, according to ancient writers. Repeated attempts to pare back the list all eventually proved futile. Moreover, the demand morphed from free grain to free bread (grain already baked), resulting in additional state expenditures for subsidizing not just the grain but also the bakeries and bakers. 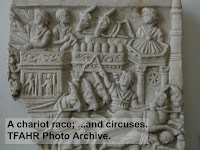 The infamous games (gladiatorial combats, animal hunts, and chariot races, or circus games) had their remote origins in funeral rites in which blood was spilled in honor of the deceased. But in the fourth century BC, the ritual was opened to public attendance, changing a macabre funerary ritual into a gruesome form of entertainment. Within a short time the games were divorced from their funereal context and came to be offered free to the public as a display of generosity on the part of some well-heeled politician. By the time of Augustus (reg. 27 BC-14 AD), every aspiring magistrate was expected to sponsor free games. Augustus, in fact, boasts in his autobiography as much about the costly games he sponsored as about the victories he racked up. When Trajan (reg. 98-117) conquered Dacia (Romania), he felt compelled to entertain the mob with 123 days of free games. Of course, the state also had to construct venues for the entertainment: theaters, amphitheaters, and circuses (hippodromes).

Between the bread and the circuses, Rome’s masses were kept quiet and did lose their violent political inclinations, but at the expense of exhausting many valuable resources that could have been deployed more profitably elsewhere. Several entire legions that could have been defending the borders were tied down in northern Africa just to ensure an uninterrupted supply of grain to the city of Rome. The state explained away the dole as charity and excused the games as inculcating manly, warlike virtues in the men of Rome. But the truth was quite otherwise. 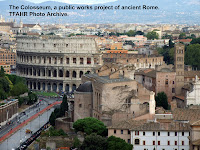 Few of the Roman urban dependency class ever enlisted in the legions and most just refused to work at anything legitimate. Occasional attempts were made to provide the unemployed with employment. Vespasian (reg. 79-81) drafted the able-bodied idle into the ranks of the grunt laborers who worked on the Colosseum. But such short-lived public works projects were hardly a means for providing the sort of skills that would keep people off the dole.

Symbolic of the utter uselessness of the Roman dependency class are three telling anecdotes from ancient authors. First, we are told that even in time of dire crisis, legionary recruiters rarely ever went into the cities to find potential soldiers amongst the men of the mob to defend the Empire. Second, after the Germans sacked the city of Trier in the fourth century AD, the city government repaired their amphitheater before they repaired the city walls. And third, during the grueling 14-month siege by the Vandals of Hippo in 429-430 AD, the citizens of that fine city still found time to watch and cheer at the games.

Rome had never intended to create a citizenry unable to fend for itself. It was just a matter of good intentions gone awry. But as the proverb says, “the road to hell is paved with good intentions.” Whether we are on this road or not is left to the next “Lessons in History.”
But who is Professor Tyler? He is not my professor of thirty years past. He is said to be the author of one of the most famous quotations regarding democracy, to wit,

“A democracy cannot exist as a permanent form of government. It can only exist until the voters discover that they can vote themselves largesse from the public treasury. From that moment on, the majority always votes for the candidates promising the most benefits from the public treasury, with the result that a democracy always collapses over loose fiscal policy, which is always followed by a dictatorship.”

He then traces the course of great states, saying that they progress,
“… from bondage to spiritual faith; from spiritual faith to great courage; from courage to liberty; from liberty to abundance, from abundance to complacency, from complacency to apathy, from apathy to dependence, from dependence back to bondage.”

Next time we’ll approach the concept of state-facilitated dependency vis-à-vis the observation of the enigmatic Professor Tyler.
Posted by William Neidinger at 4:05 PM