IN GOD WE TRUST: MONEY

The Roman Emperor Julian (reg. 361-363) once chided Christians for their childlike gullibility and simplistic faith. His implication was that a reasonable man should guide his actions by the dictates of logic, not faith. The criticism is unfair on two counts. First, all religion is a matter of faith; hence, the opening word of the Creed, credo, I believe, not scio, I know. Second, Julian should have been brought to task for inconsistency. Why ridicule the Christians for their faith in their God, while fully expecting them to have faith in something that is fundamental to all government concerns: money.

Money (in coin or print) has become such a commonplace in our lives that it is only rarely that we are reminded what a leap of faith is involved when handling these media of commerce. A society innocent of money has to rely on barter in the exchange of goods and services. The consequences are not difficult to fathom; trade is awkward and the valuation of wealth cumbersome, having to be measured, for instance, in units of land or ingots or cattle. In fact, some elements of the Indo-European monetary vocabulary (pecuniary, pecunia, pécunaire) have their root in the Latin word for cattle, pecus. But inconvenience is the mother of invention.

At some point in our remote past somewhere, someone made the decision that valuations should be standardized. So it came to be agreed that a standardized weight of metal would have a value equivalent to so many chickens, bolts of cloth, or bottles of wine. The standardized weight was the immediate forerunner of the coin. The shekel, for instance, was a weight unit long before it morphed into a coin.

In the West, the Lydians (inhabiting western Turkey) are credited with the invention of coinage in the seventh century BC. We moderns might be hard-pressed to recognize an ancient Lydian coin as a coin at all. It was a small lump of electrum with a stamped impression. The stamp was every bit as important as the metal. In fact, it was the stamp that validated the metal. It represented the promise of the Lydian government that said lump (the coin) contained a verified amount of verifiably pure electrum. The Lydians then placed their faith in their government that said government was dealing honestly with them. A tremendous leap of faith, that. 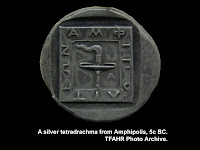 The Greeks turned coinage into an art form. Not satisfied with stamped lumps, the Greeks impressed their silver disks with beautiful images on obverse and reverse. The Athenian drachma was a work of art in itself. So long as Athens maintained the weight and purity of her silver, the drachma was the trusted medium of commerce across the Mediterranean world. 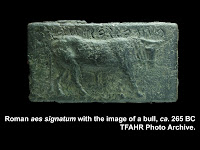 The Romans were slow learners when it came to coinage. Rome’s earliest coins were little more than bars of bronze with symbols on them (the aes signatum). For nearly three hundred years the Romans used what was essentially scrap metal for currency. Then, in the third century BC, they began minting coins remarkably like the Greek coins of southern Italy. 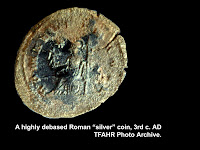 There were, of course, certain temptations regarding coin. An unscrupulous individual might shave slivers off the edges of gold or silver coins, eventually collecting a stash of shavings that in itself might be worth its weight in gold or silver. Hence serrated edges or raised rims on coins to prevent such shenanigans. Likewise, governments have been known to stoop to monetary mischief: debasement of coinage. The idea is simple: dilute the gold or silver with a baser metal and pass off the “gold” or “silver” coin on an unsuspecting citizenry. In effect, the government could mint more money to pay off debts or for needed expenditures, when not enough tax revenues were forthcoming or sources of gold and silver had dried up. The consequences were predictable. The citizenry, not that unsuspecting after all, refused the debased coin. In the third century AD Rome had so debased her silver coinage with bronze, that the silver coin was little more than a bronze disk with a wash of silver. Not only did the people, now reverting to barter, shun the coin, but imperial tax collectors refused to accept it as a legitimate payment on tax. A government refusing its own currency must have been an historical first! 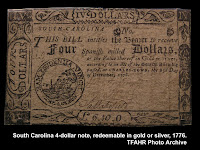 Paper money, making its appearance in seventh century AD China, involved another leap of faith. The banknote essentially was a promise on the part of the government to pay the bearer, on demand, a certain weight of silver or gold. Paper currency made its debut in Europe in the sixteenth century. Again, it was the promise of the government that the banknote was really backed up by precious metal. American banknotes once boasted of this convertibility into specie. Alas, no longer. In 1933 FDR issued Presidential Executive Order 6102 forbidding the private ownership of gold in excess of $100. He justified the order by the “national emergency in banking.” The fear was that people would lose their faith in the greenback, and transfer it to hoarded gold. The redeemable Silver Certificate also met its demise in 1963.

The prevailing belief of modern government now came to be articulated, that legal tender does not have to be backed up by gold or silver bullion. The true backing behind legal tender is now said to be the value of the goods and services that money can buy. In one sense this is true, and in another sense it is not. In abandoning the gold standard, it was recognized that gold and silver, like any other commodities, exist in a world governed by supply and demand; they have no absolute intrinsic value. For example, Alexander the Great flooded the Mediterranean world with the gold of recently conquered Persia, sending the value of gold plummeting. Likewise, after the discovery of the New World, Spain swamped the Old World with galleons worth of silver and gold. The inflationary effect on Europe was catastrophic. But in another sense, money is definitively more than just the value of the goods and services it can buy, in that it is also the repository of our faith in our government. Money is now “fiat” money; it is issued and regulated by government. The unstated implication is still (as it always has been) that our government is dealing honestly with us to hold our trust.

The motto on our coins (since 1864) and notes (since 1957), “In God We Trust,” does not refer to a belief that Providence will make good on our currency. It is only a vague reference to American piety and belief in deity. Our faith lies in the belief that our government will not surreptitiously print reams of spurious bills to inflate its way out of debt, float its debt on to another generation, or finesse its way through a bailout or two.
Posted by William Neidinger at 4:40 AM