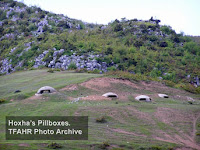 When a government fortifies its borders, it does so usually for one of three reasons. To keep people out, as with the Great Wall of China. Or to keep people in, like the Berlin Wall. In rare circumstances a government might close and fortify its borders both to keep its citizens in and foreigners out. Perhaps the most bizarre example of the last is the (quite successful) program of the late Communist dictator, Enver Hoxha. To isolate Albania he planted more than 700,000 concrete pillbox bunkers at strategic points throughout the country. A ruthless secret police and a string of concentration camps undoubtedly added to the plan’s efficacy. 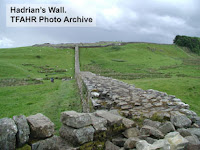 Ancient Rome’s most famous fortified frontier was Hadrian’s Wall, a barrier more than eighty miles long separating and protecting Roman Britannia from the barbarians of the Scottish highlands. The wall-and-ditch defense was studded at regular intervals with Roman army camps. Despite such formidable defensive works, savage tribesmen breached the Wall at least three times, as far as extant records indicate, before it was finally abandoned in the 5th century AD.

An interesting aspect of this stretch of Rome’s northern border is that it was what we might call selectively porous. Again at regular intervals, provision was made for the supervised passage of man and beast to and from Britannia, basically for economic reasons. Goods were exchanged between the Romans and Picts; shepherds transhumanced their flocks back and forth; seasonal workers came and went.

Rome’s other borders were essentially great natural barriers: the Rhine and Danube Rivers, the Sahara, and the Great Syrian Desert. Not trusting Mother Nature to protect her Empire, Rome fortified and patrolled these frontiers as well. Again, these borders were porous, once more for economic reasons. Rome conducted a thriving trade with sub-Saharan Africa, Persia, and Germanic Europe. Great caravan cities in Tunisia, Syria, and Jordan were mercantile depots where African ivory, Chinese silk, and Arabian myrrh entered the Empire. Along the Rhine and Danube Romans established market towns where Germans came to trade: Roman luxury goods for slaves, amber, and furs.

The Romans did not regard any of their borders as necessarily ordained by either the gods or Nature. Rome settled upon them as a result of losing military or political steam. The deserts of Arabia proved too formidable for Augustus and he had to content himself with control of the Red Sea lanes. Roman expeditions into the Sahara met with a striking lack of success. Persia blocked Rome in the east. Rome only briefly held control of some territory north of Hadrian’s Wall. And Roman legions were soundly defeated a number of times in their attempts to conquer Germanic Europe.

Neither has God nor Nature ordained America’s borders. Our border with Canada ultimately came down to a matter of political compromise. Our southern border was established as a consequence of war, purchase, and real estate deals. William Seward negotiated the purchase of Alaska in a czarist fire sale. And islands scattered about the world came primarily as a result of wars and colonial ventures gone awry. Our most contentious border is that which we share with Mexico. And America’s relationship with Mexico shares a few intriguing similarities with Rome’s dealings with the Germans, similarities worth reflecting upon.

Rome’s attitude towards the Germanic tribes was never a simple matter of posting signs at the borders proclaiming, “Germans Not Welcomed Here.” Since the beginning of the Empire, Rome actively recruited Germans into her army. Individuals and even entire clans would serve as auxiliary troops alongside the legions. The reward: good pay, occasional loot, and, upon retirement, Roman citizenship. The army served admirably as a vehicle of assimilation into the Roman polity. 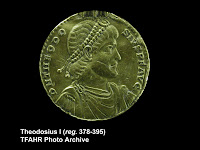 As the imperial government became more repressive towards its own citizens, fewer Romans could be enticed into military service. Rome made up the shortfall with Germans. Tribes that politely petitioned the Empire to live within her confines were required to obey imperial law and were settled with the aim of defending the frontiers. Theodosius I recruited into the army entire German tribes, who served under their own commanders. In the much-vaunted Roman victory over Attila in 451 AD, Aetius’ “Roman” army probably boasted more Germans than Romans. The last great Roman army fielded in Italy in the fifth century was commanded by Odoacer (a German) and consisted entirely of German foederati (allies). And when the emperor in Constantinople wanted Odoacer brought to heel, he commissioned Theodoric and his Ostrogoths (also Germans) to do the deed. Roman soldiering clearly had become a predominantly German occupation. Under such conditions, legionary service ceased to be an effective medium of assimilation.

Herein lay Rome’s (and America’s) quandary regarding immigrants: absorption versus assimilation. The two words, now used interchangeably, originally had different meanings. To absorb meant to take (literally, to suck) in. To assimilate meant to make similar or alike. The Roman Empire was able to take in entire Germanic nations without inconvenience; the Empire was decidedly depopulated, entire provinces lay largely unfarmed, and Rome badly needed soldiers, the job Romans no longer wanted. But as Germanic migration turned from a trickle into a torrent and then into a full-scale invasion, Rome could absorb but no longer assimilate the Germans. For a variety of reasons, there was no longer the cultural means or the political will to “Romanize” them. Consequently, the Empire harbored within her borders an alien - and alienated - minority, indifferent to the allurements of Roman citizenship, hostile to imperial needs, and waiting for the first opportunity to prey upon Rome’s weakness.

Likewise, America can absorb many more immigrants than we take in now. Our birthrate is, after all, at the cusp of the replacement rate, if not declining. And there are many jobs that Americans, given their druthers, choose not to do (at a certain wage, anyway). But we seem to have lost the ability or will to assimilate new arrivals (legal or illegal). For Rome and America, assimilation never entailed the obliteration of one’s ancestry, but, rather, a new dedication to a set of common ideals (Rome and her laws, symbolized by the emperor; America and her Constitution, symbolized by the flag). Currently, however, a policy of multi-culturalism has metastasized from a celebration of our diverse ancestries into an obsession with what divides us, rather than a thanksgiving for what unites us. It behooves us to recall Lincoln’s admonition about a house divided.

FOR READERS IN THE HOUSTON AREA: I will offer a 6-lecture adult education series, "The Decline and Fall of the Roman Empire," in Houston beginning January 26, 2009. In this series I will examine the events, personalities, and causes of the decline and fall of Rome, and assess the validity of comparisons to the modern West. Information on this series and registration forms can be found at http://www.tfahr.org/DFRome.html .
Posted by William Neidinger at 7:11 AM